A story on Halloween – A Birthday Gift 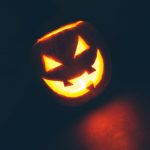 A story on Halloween

“Good evening mom.”Anil said, “I am back from school.  Can I go to Austin’s birthday party?” “OK. Have fun. Don’t forget the birthday gift that your father brought last Sunday forAustin.” Anil’s mom said. His father bought a video game as a gift to Austin.  Anil was watching television last night and packing the gift for Austin.  He was so engrossed in watching his favourite cartoon that he wrapped his own video game as a gift for Austin. “Thank you mom, I have packed the gift for Austin”, Anil said. Excited, Anil headed off to his friend’s party with the gift.

The party was arranged in a big hall; the walls were decorated with balloons of various sizes, colours, and shapes. The happy birthday poster was eye-catching behind the big, magnificent, delicious, colourful birthday cake.  Anil entered joyfully, wished Austin, gifted the video game and joined his friends. Anil happily participated in the party games and enjoyed them with his friends. Austin opened his gifts after the party and was surprised to see the gift that he got from Anil as the video game was on. He was curious and started playing the game on his television. He also had another big surprise that it automatically cleared 10 worlds which were more than half of the game. The game had 15 worlds from which 10 worlds were completely played. Austin never suspected that Anil would give him a gift that was used.

Austin liked the game a lot and started playing. He completed the 11th and 12th world which took around 2 months to complete. When he clicked the13th world, a buzzing noise was arising. Austin thought that the sound was from the TV. But suddenly the TV emitted a bright light and bits of Austin’s body were crumbling. First, his hands, then his legs, stomach, back, chest and at last his head were going inside the TV.  Everything was still in the living room. Meanwhile, in the video game, it was completely dark, it was eerily quiet which sent shivers down his spine. Then there came a loading symbol. A deep and scary voice said, “You are in World 13, the Zombies hide-out. Your mission is to destroy the zombie’s leader Ghoulish zombie and a dragon.” Austin was too startled to respond to anything. Suddenly he appeared with a sword and some soldiers behind him. A group of zombies approached Austin and the soldiers who were with Austin. A zombie spat something beside Austin and the zombie disappeared. Instantly, the zombie appeared beside Austin, punched him and spat some venom right at his neck. The venom that burnt through his neck gave him unbearable pain and killed him.

He respawned with 2 lives in a place where he was guarded by soldiers. This time he had a double-sided axe in his hand. Austin said to his soldiers, “Why are you protecting me now when we are supposed to attack the zombies? Can I get three soldiers now please?” The soldiers without questioning started attacking the zombies. Three soldiers were there with Austin. Austin asked, “I don’t need three soldiers, I just need one. Two of you can build a shelter for the night.” Austin went up a small hill with the soldier. He could view the battle between the zombies and his soldiers from the hill. Austin said, “Is there any forest here?” The soldier replied, “Yes, there is, but it is not dense. Why?” Austin replied, “I am hungry so I want to hunt and have some food.” Austin had upgraded his character to the maximum level so he was pretty strong. He spent the rest of the evening hunting. He could gather many fruits, and his soldier (who had now become his bodyguard) hunted along with Austin and gathered a lot of food. Austin had his dinner and slept in his tent while his soldiers guarded him.

The next morning, Austin got up, had chicken for his breakfast as he ate all the fruits last night.  Austin tied his axe to his back, called his bodyguard and said,“Come on, let’s defeat the zombies now.” Austin and his bodyguard went and explored the cave from which the zombies were coming mysteriously. Austin heard footsteps; he turned his head and was shocked to see his bodyguard lying down dead. A zombie jumped in the air and attacked Austin before he could notice. Austin saw another zombie to his right. He was taking out the axe from his back and suddenly felt the axe was becoming very heavy.When he turned around and checked his axe, he saw that he accidentally struck a zombie which was attacking him. The axe cut right through the zombie’s chest. Austin said, “Huh. That was very close, I was lucky this time. I must be careful next time.”  His curiosity in exploring the cave did not die. So, he explored the cave for an hour and then he found a small door. The door was opening every minute and creating a zombie. Then he thought that the door is the zombie spawner. Hence he decided to destroy the door. He found a fire nearby and he grabbed a stick, set it alight, and burnt the door.  He lit the stick and made a small hole in the door with the help of it. The door was on fire and instantly, everything went dark.

Then, he saw the same loading symbol again and the same deep voice said, “Mission accomplished.Now you need to fight with the dragon.” He spawned with asword in a place where it was dark. He came out from the shade and saw a dragon that had sharp claws. The dragon was enormous with very big wings, a spiky and poisonous tail and most of all it was breathing out smoke which meant it couldbreathe out fire. Austin jumped in a nearby lake to hide from the dragon. He thought that the water was moving. He saw that there were sparks. In a moment there was a flash and he was zapped by electricity, by an electric eel. Austin unfortunately died but he respawned with the same voice saying to him, “You have to be careful. The dragon is tough you have two more lives, if you lose the lives you will be doomed in this game.”  This time, he respawned with a spear and muttered to himself, “I just lost a life simply. I can do it.” Without a second thought, he charged straight to the dragon. He leapt into the air. He had already upgraded his gaming character to the maximum so, his jump was very high. He threw his spear right at the underbelly of the dragon. The spear went right through the underbelly. The dragon leapt high into the air with a roar of agony and burst out a flame right at Austin’s face. Austin staggered back with surprise and pain. He was burning and lost another life. Austin respawned with an odd handle and found a button. He clicked the button on the handle. A light that looked like a sword’s blade came out of the handle. Austin dropped the handle. The part which looked like the sharp blade of the sword touched the ground, cutting the rocks. Austin thought it was a lightsaber. Austin saw a flat steel surface with a handle. It also had 2 holes, but they were covered with glass. With the help of a rope that he had, he tied the shield to his hand to protect himself from the dragon’s fire. This time he did not attack the dragon. He carefully planned his tactics. After a while, when the dragon was not alert and was on all four of its legs, he gave a quick stab on the dragon’s belly. The dragon jumped with a terrifying roar and opened its wings to fly away from Austin. This time Austin jumped on the dragon’s tail, knowing that the dragon would breathe out the fire on him. He ran on the spiky dragon’s spine, dragging his lightsaber behind him which cut the dragon back. The dragon flipped himself due to pain and couldn’t fly. The dragon was falling from the sky, breathing out fire wherever it could see. Austin was gripping the dragon’s tail tightly, but the dragon was shaking the tail so vigorously that he could not hold on to the tail anymore. He fell onto the dragon’s mouth with the big thump. After a few seconds, the dragon fell to the ground with a big thud. The dragon breathed out fire as much as it could on Austin and the enormous, scary dragon lay down and took its last breath.

Then he appeared back into his house and checked everything. His mom was happily chatting with his aunt instead of complaining to the police that Austin is missing. His father was doing his office work without even taking a glance at Austin. He checked his bedroom clock; he was sucked inside the video game at 7.32 pm and now the clock was showing 7.40 pm. He checked the date. But to his surprise, it was the same day, date, and year. Now Austin could not hold his breath and gave out a yelp of shock. Both of his parents came running and hugged him. Austin said, “Mom, do you remember my birthday party and the gift Anil gifted me?” Austin’s mom said,“Yes, I remember. What is so shocking in the video game?” Austin replied,“Mom, the game sucked me inside, I almost died there.” His mom was shocked and said, “What are you talking about?” Austin explained everything even about the time he spent there and the time the clock is showing here. His mom said,“Nonsense. You are so addicted to games that you are thinking that you were sucked into it. No video games for a whole month.”The next day Austin went to school. He narrated the incident to his friends. Nobody believed him except Anil.

Curious Times is committed to providing the best experience and news to children. We bring to you the Curious Times Weekly with the top news of the week. You can also check out The Curious Magazine, the first children’s magazine with all the great content by the children, for the children. We would love for you, dear children, to write and get your stories, art, thoughts and more published at My Expressions. Write to us at hello@curioustimes.in.You can also follow us on WhatsApp, Instagram, Facebook Youtube, Twitter, LinkedIn.