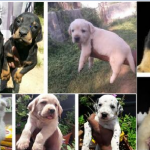 Sahakara Nagar is a beautiful residential area in North Bangalore. Every day, I go for walks around Sahakara Nagar. Following are a few incidents and encounters of mine with the dogs of Sahakara Nagar. In Sahakara Nagar, we get to see different types of dogs. Some are very furry, some look like wolves, and some look like cats. Some of the breeds of dogs in Sahakara Nagar are Bulldog, Labrador Retriever, German Shepherd, Poodle, Chihuahua, Great Dane, Terrier, etc. Some of them look extremely cute and cuddly! But there are a few burly and ferocious-looking dogs that I fear. Then, there are a few dogs who seem to be trying to befriend the stray dogs, but their owners will not let them do it. There are also a few dogs who know the way from any area in Sahakara Nagar to their home perfectly well! Some of them also like to chase small birds or butterflies.

In my village, we have dogs, but all of them seem to be very playful and hyperactive. In Sahakara Nagar, when I see dogs sitting in the scooters or cars of their owners, I wonder how they sit so quietly and calmly and whether the dog in my village can be trained to do this. In Sahakara Nagar, there are many ways for dog walkers. Some dogs, who are hyperactive, drag their owners along with them. Then, there are some owners who have very lazy dogs and must drag the dogs with all their might to go for walks!

One day, I and my mom were taking a walk. We were about to turn a corner when two stray dogs came rushing right at us! I was frozen with fear! I was sure that these dogs were going to bite us and thought of running away. Even my mom was scared! But even though we were frightened out of our wits, we had the sense to stay still. Thankfully, the dogs steered clear of us. They were chasing each other. I sighed with relief! But this is an incident I will not forget, even in a hurry.

Another time, when my parents and I were out for a walk, we noticed two dogs, a Bulldog, and a Chihuahua. The Chihuahua was barking at the Bulldog and the Bulldog was looking at it. For those who do not know, a Chihuahua is ridiculously small compared to the Bulldog. I thought the Bulldog looked a little bit scared. But then I thought that the Bulldog is bigger than the Chihuahua and that it had no reason to be scared. But a few seconds later, the Chihuahua was chasing the Bulldog, and the Bulldog took off, dragging its owner along with it! This also has a lesson for us. It shows that we should not be scared and that we should face every challenge bravely. Overall, I enjoy watching all these antics of the dogs of Sahakara Nagar, but I would not want to come in their way😉. This is also a motivation for me to walk, as I look forward to these antics.