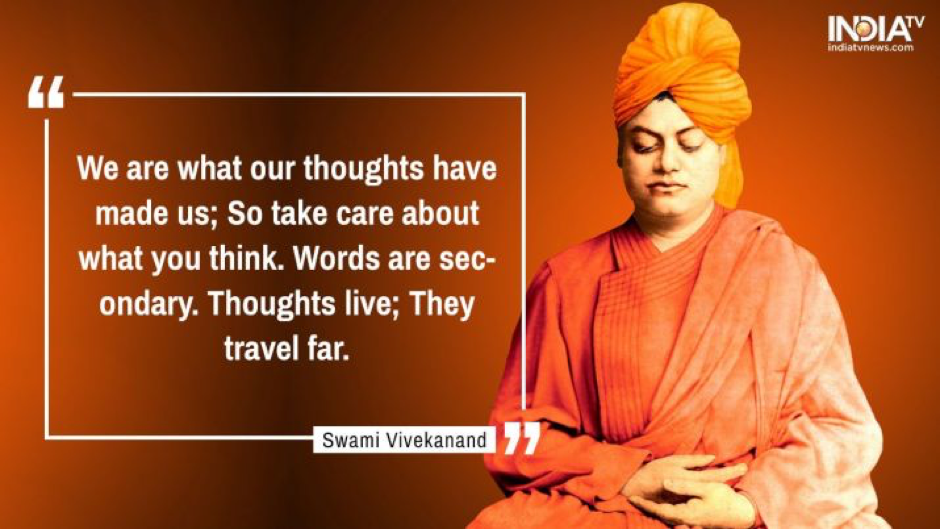 If I were to say that, one of the nine children born to a middle-class Attorney and a God-fearing illiterate woman in a poor and colonial Province of Bengal, would go on to convince the Wealthiest Person of the Modern Era to become a philanthropist from being a person who was famous for not even spending a penny for anybody; would you believe me?

Well, such were the contributions and achievements of Swami Vivekananda – ‘Unbelievable’. Yes, if I had the opportunity to bring back one famous person from history, it would be Swami Vivekananda.

Who was Swami Vivekananda?

Swami Vivekananda (Originally Narendranath Dutta) is widely known as a Hindu monk and one of the most celebrated spiritual leaders of India. He was more than just a spiritual mind; he was a prolific thinker, great orator and a passionate patriot. He carried on the free-thinking philosophy into a new paradigm. He worked tirelessly towards the betterment of the society, in servitude of the poor and needy, dedicating his all for his country.

His message of universal brotherhood and self-awakening remains relevant especially in the current backdrop of widespread political turmoil around the world.

What was his journey?

As a young boy, Narendranath underwent a deep spiritual crisis at the start of his youth. His well-studied knowledge led him to question the existence of God. To satisfy his intellectual quest for God, Narendranath visited prominent spiritual leaders from all religions, asking them a single question, “Have you seen God?” Each time he came away without a satisfying answer. He put forward the same question to Sri Ramkrishna Paramhansa. He replied: “Yes, I have. I see God as clearly as I see you, only in a much deeper sense.” Narendranath was astonished by Ramakrishna’s reply. Ramakrishna gradually won over this argumentative young man with his patience and love.

In 1884, Narendranath underwent considerable financial distress and went to the temple to pray for financial welfare, but once he faced the Goddess he could not ask for money and wealth, instead, he asked for ‘Vivek’ (conscience) and ‘Bairagya’ (reclusion). That day marked the complete spiritual awakening of Narendranath and he formally renounced all ties to the world and took vows of monkhood and Narendranath emerged as Vivekananda meaning “the bliss of discerning wisdom”. He went on a tour of India on foot and witnessed the adversities of life that the common people faced, their ailments, and vowed to dedicate his life to bring relief to those suffering.

During the course of his wanderings, he came to know about the World Parliament of Religions being held in Chicago, America in 1893. He left for Chicago on May 31, 1893, from Bombay. He faced insurmountable hardships on his way to Chicago, but his spirits remained as indomitable as ever. On 11 September 1893, when the time came, he took the stage and stunned everyone with his opening line “My brothers and sisters of America… ”. He received a standing ovation from the audience for the opening phrase. He went on to describe the principles of Vedanta and their spiritual significance, putting Hinduism on the map of World Religions.

Vivekananda returned to India in 1897 and founded the Ramakrishna Mission. The Ramakrishna Mission undertook various forms of social service like establishing and running schools, colleges and hospitals, propagation of practical tenets of Vedanta through conferences, seminars and workshops, initiating relief and rehabilitation work across the country.

Swami Vivekananda was a prominent nationalist and had the overall welfare of his countrymen topmost in his mind. He urged his fellow countrymen to “Arise, awake and stop not till the goal is reached”. Swami Vivekananda revealed to the world the true foundations of India’s unity as a nation. He taught how a nation with such a vast diversity can be bound together by a feeling of humanity and brotherhood.

“After going through Swami Vivekananda’s teachings my love for our country became thousand fold”.

“Swamiji harmonized the East and the West, religion and science, past and present. And that is why he is great. Our countrymen have gained unprecedented self-respect, self-reliance and self-assertion from his teachings”.

Vivekananda instilled hope and illumination in a country torn with despair. His teachings have been an inspiration to many, and his words have become goals of self-improvement especially for the youth of the country.

For this very reason, his birthday, January 12, is celebrated as the National Youth Day in India and in a world today which is in chaos and desperate need of guidance, Swami Vivekananda would be the ultimate source of enlightenment.