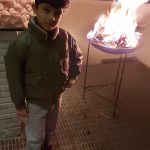 1. There was a young man from Greece
Who found a bug in his stew?
Said the waiter don’t shout and wave it about
Or the rest will be wanting one too.

2. There once was a mad king from Spain
Who liked to dance in the rain
Who got wet through and caught a bad flu
So never went out there again.

3. My favorite animal is the cat
But he is very big and fat
I wish I could have a furry Bunny
Who is very funny
And he loves to sleep on a mat.

4. There was a small child named Gain
Who loves to get wet in the rain
He plays with the Beach ball
But had a big fall
And his clothes got a muddy stain.

5. There was a mad king from Spain
Who had a smart Brain?
He showed his silly tricks
But instead, he got hurt by bricks
And left by a long train

6. There was once a brown bear named boo
Who had Cough and a Flu
He went to a doctor who gave him a pill
Reached his home which was on a hill
Soon he felt as fine as you.