Buzz Aldrin was born on 20 January 1930 in New Jersey, US. He was born as Edwin Eugene Aldrin Junior. His little sister called him ‘buzzer’ instead of brother. He then officially changed his name to Buzz Aldrin in 1988.

After finishing school he joined the United States Military Academy and graduated with a degree in Mechanical Engineering.

In 1951, he joined the Air Force and 2 years later joined the Massachusetts Institute of Technology. He graduated with a PhD degree in aeronautics in 1963.

Buzz was then selected as a member of NASA’s (National Aeronautics and Space Administration) Astronaut Group 3 in 1966. And he was part of the Gemini -12 spaceflight mission. 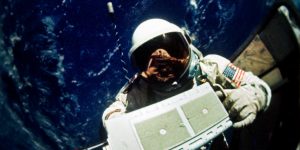 The historic walk on the Moon

Later, he was chosen to be part of the historic Apollo 11 crew along with Neil Armstrong and Michael Collins.

On 20 July 1969, Buzz became the 2nd person to step on the Moon after Neil Armstrong. 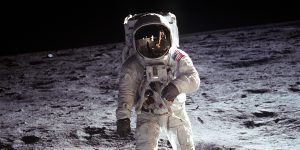 Buzz Aldrin on the moon

They spent 21 hours on the Moon surface and returned with 46 pounds of moon rocks.

Buzz Aldrin has written many books and was awarded the Presidential Medal of Freedom by US President Richard Nixon.

Curious Times is committed to providing the best experience and news to children. We bring to you the Curious Times Weekly with the top news of the week. You can also check out The Curious Magazine, the first children’s magazine with all the great content by the children, for the children. We would love for you, dear children, to write and get your stories, art, thoughts and more published at My Expressions. Over 200,000 children are benefitting from Curious Times today! Feel free to write to us at hello@curioustimes.in.You can also follow us on WhatsApp, Instagram, Facebook Youtube, Twitter, LinkedIn.

When Buzz Aldrin joined Neil Armstrong on the surface of the Moon, he had to make sure to keep the hatch of the spacecraft slightly open due to pressure differences. Otherwise it would have been difficult to reenter the cabin.