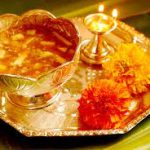 Ugadi or Yugadi is the New Year’s Day for the States of Andhra Pradesh, Telangana, Karnataka in India. It is festively observed in these regions on the first day of the Hindu lunisolar calendar month of Chaitra. This typically falls in April month of the Gregorian calendar.

Ugadi has been an important and historic festival of the Hindus, with medieval texts and inscriptions recording major charitable donations to Hindu temples and community centers on this day. The same day is observed as a New Year by Hindus in many other parts of India. For example, it is called Gudi Padwa in Maharashtra. The day is observed by drawing colourful patterns on the floor called Muggulu ( Rangoli ) mango leaf decorations on doors called Torana, buying and giving gifts such as new clothes, giving charity to the poor, special bath followed by oil treatment, preparing and sharing a special food called pachadi, and visiting Hindu temples.The pachadi is a notable festive food that combines all flavors – sweet, sour, salty, bitter, astringent and piquant.

In Telugu and Kannada Hindu traditions, it is a symbolic reminder that one must expect all flavors of experiences in the coming new year and make the most of them. The Kannada, Kodava, Telugu and the Tulu diaspora in Andhra Pradesh, Karnataka, Tamil Nadu and Kerala celebrate the festival with great fanfare; gatherings of the extended family and a sumptuous feast are ‘de rigueur’. The day begins early with ritual showers, rubbing the body with perfumed oil, followed by prayers. Ugadi Pacchadi (right) is a symbolic dish prepared by Hindu people at this festival. Preparations for the festival begin a week ahead. Houses are given a thorough clean. People buy new clothes and Dhoti and buy new items for the festival, decorate the entrance of their houses with fresh mango leaves. Mango leaves and coconuts are considered auspicious in the Hindu tradition, and they are used on Ugadi.

People also clean the front of their house with water and cow dung paste, then draw colorful floral designs. People offer prayer in temples. The celebration of Ugadi is marked by religious zeal and social merriment.