What happens when you speak the truth? 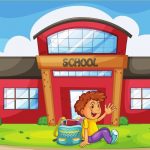 Comedy story
A story about a character who is brutally honest and can’t lie to save his or her life.
Once there was a boy called Danny who had brown hair and green eyes. Danny had a problem. Whenever he lied his stomach would start to ache and he would start to vomit.

Once at school Danny’s teacher said that whoever is smart please stand up. Everyone stood up but Danny did not stand up. So the teacher asked, “Are you stupid?” Danny answered, “I sat because otherwise, you were the only one to sit.” After that everyone burst into laughter and the teacher took him to the principal’s office. The principal asked
Danny, do I look stupid? Danny answered, yes you look stupid. The principal got angry and made Danny clean the library. The librarian asked Danny, how do I look? Danny answered you look ugly and dirty. They all got very angry and from that day Danny was thrown out of the school.

After some days, some guests came to visit Danny’s mother. Danny’s mother warned Danny to behave properly. When the guest asked Danny, how do I look? Danny could not lie so he answered very ugly, dirty and mad. The Guests were disappointed and left immediately.

Danny’s parents decided to lock him in one room and live a normal life. From that time Danny was locked and his parents lived happily.