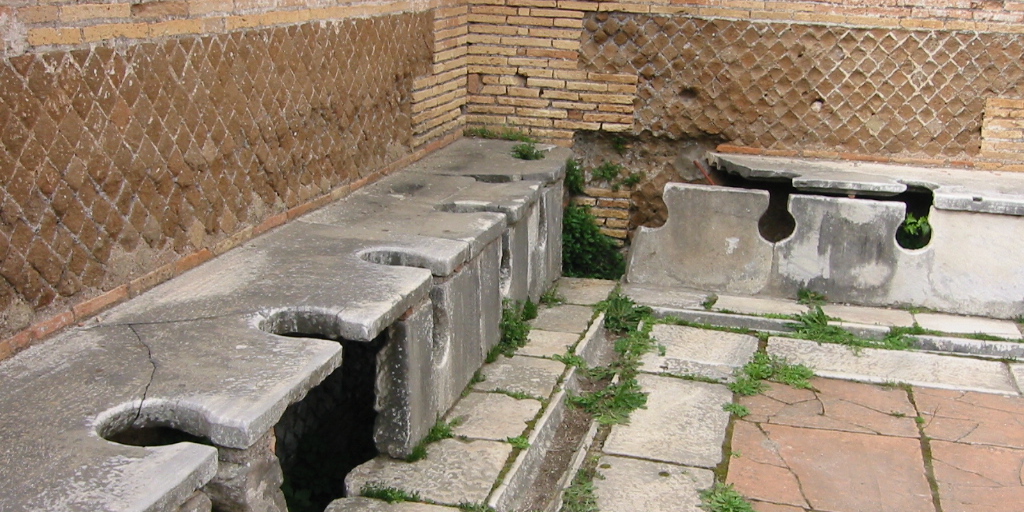 Have you ever wondered how long ago toilets were invented? Where did kings head when nature called them? Did they go all the way to a jungle? Did they hide behind a tree? Did they have water or toilet paper? This is an interesting topic. Let’s do a full series. Toilets in the Ancient World are what we’ll discuss today.

Toilets in the Ancient World

Skara Brae (Scotland) – In the ancient world, people were capable of designing quite sophisticated toilets. Stone age farmers lived in a village at Skara Brae in the Orkney Islands. Some of their stone huts had drains built under them and some houses had cubicles over the drains. There may have been inside toilets.

Egyptians – In Ancient Egypt rich people had proper bathrooms and toilets in their homes. Toilet seats were made of limestone. Poor people made do with a wooden stool with a hole in it. Underneath was a container filled with sand, which had to be emptied by hand. (If you were wealthy slaves did that!)

Indians – In the Indus Valley civilization (c.2,600-1,900 BC) streets were built on a grid pattern and networks of sewers were dug under them. Toilets were flushed with water.

Greeks – On the island of Crete the Minoan civilization flourished from 2,000 to 1,600 BC. They too built drainage systems, which also took sewage. Toilets were flushed with water.

Romans – The Romans also built sewers to collect rainwater and sewage. (They even had a goddess of sewers called Cloacina! Btw, they had Gods for everything!). Wealthy people had their own toilets but the Romans also built public lavatories. But there was no privacy just stone seats next to one another without partitions of any kind. Despite the public lavatories many people still went in the street. After using the toilet people wiped their behinds with a sponge on a stick.

We hope you are not finding this gross and want to know what happened over the years and in other parts of the world. And what has been our journey to the current style of toilets.

Wait for our next one, next week!!!
Meanwhile, if you know of anything about history of toilets, please share with us.

Parent of a homeschoolerGreater Noida