In India, Navy Day is celebrated on 4 December every year.

The day is celebrated to recognise the achievements and role of the Navy in the security of our country.

Indian Navy is a branch of the Indian Armed Forces that safeguard the maritime (oceanic) borders of India. 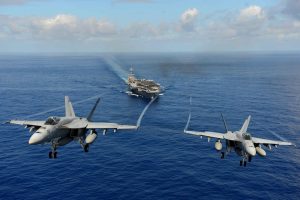 Why does India celebrate the Navy Day on 4 December?

The reason, India celebrates the Navy Day on 4 December is to commemorate the Indian Navy’s victorious attack on Pakistan’s Karachi harbour during the Indo-Pakistan war of 1971. K P Gopal was the man who led the task force that sank 3 Pak navy ships.

How do we generally celebrate the Navy Day?

In 2021, India is celebrating the 50th anniversary of its victory over Pakistan in the 1971 war. Indian Navy over the years has carried out many operations.

During the year 2020, the Indian Navy’s most important operation was ‘Operation Samudra Setu’. In this, Indian citizens from overseas were brought back to India by sea during the COVID-19 pandemic.

Chhatarpati Shivaji Bhosle, the Maratha emperor of the 17th century is considered as the “Father of the Indian Navy”.