The SEVEN GHOSTS on The Land 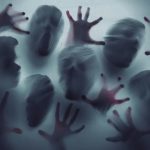 The SEVEN GHOSTS on The Land

It was a day of Halloween & the children of the streets were getting ready for a ‘TRICK OR TREAT’. But there was someone else too getting dressed up. They are none other than the spooky creatures. They whispered “Hey! Let’s go to the houses to ‘TRICK OR TREAT’. When the people will come out, we can have them as our dinner.” said Broken Bones. But Cracky objected, “What if they think us to be children too and don’t get scared?” Hollow angrily responded, “Leave what will happen later. For now, let us move on.” From the next room, Open Head, Bloody Bones, Black & White Skull shouted, “We’re ready!”
When they went in the first house, there Mr. Morris was already angry because of a group of children who had stolen all his scrumptious candies. When Cracky said, “TRICK OR TREAT?”, he stomps on the floor, opened the door and beat hard over Cracky with his broom saying, “You thieves, fake ghosts, again came!!” The whole of Cracky’s body cracked down & Mr. Morris got frightened. So in fright he beat others as well. All the seven ghost friends got fractured.
Moving on Black suddenly met a child, Andy who asked him,” Hey Black Friend, his many candies did you get till now?” “None yet, but how did you come to know my name?” “Ahhh! Is it your name? I just called for fun. But I’m a real ghost you know. My name is Broked Down.” “Wait, then why weren’t you with us.” “Oh God! Chill friend. I’m just kidding.” “What did you say G-O- D??” “Yeah, I said ‘Oh God’ so?” “Oh no! Run!” Andy thought “Hmmm! What’s the matter with him? Anyway, maybe he was doing a prank. Let me go to Uncle Robert’s house for the candies.”
Black ran away and saw Broken Bones collecting pumpkin wrapped, bats wrapped, and spiders wrapped sticky candies like kids. He got fascinated by them. But then all of a sudden, a big, fat kid spotted Broken Bones’s bag full of candies and rushed & jumped on him. But already they were fractured because of Mr. Morris. Now due to that heavy kid, Broken Bones completely broke, and the kid stole all his collected candies. That made him shout, “My Candies!”

Next it was Hollow and White Skull going to a Halloween party. Everyone was served a very special spooky mocktail. But unlucky for the two ghosts that actually they didn’t have stomachs & the mocktail fell on the ground. In the party no one beared the wastage of that mocktail so everybody had kicked & beat them so much that they weren’t in a position of moving. Even White Skull’s skull was lost. They, themselves had to run away in fear.
Open Head was glad that like his pals, he hadn’t been beaten just except for the fracture. But he didn’t know that it wasn’t for long. Just then a band of wicked, naughty children came & took away Open Head’s ball, that means his head and started playing with it. He was in trouble then because without his head he couldn’t go anywhere. At last, after a long time, they kicked it straight into a swamp.

The last one left was Bloody Bones ones who was himself playing with other children. Then he remembered that he had to scare other people too. But when he stood at the door, said “TRICK OR TREAT?” Ms. Mackanzie opened the door and he got smashed by it. The other’s doors he went, there also the same. Smashed, squashed, squeezed, cracked etc. At the end he also went to his pals who were playing ‘Passing the Bone’ sitting under a Peepal tree. Broken Bones said, “Welcome, welcome. We were waiting for you only. Come, sit. By the way how was your experience, dear Bloody Bones?” “Broken Bones, don’t try to be silly. You know, very well!”

This was the experience of the seven ghosts coming among us.

The SEVEN GHOSTS on The Land. We are pleased to publish Vedant Kumar creation on Curious Times.
Curious Times is a leading newspaper and website for kids. We publish daily global news aligned to your learning levels (also as per NEP 2020): Foundational, Preparatory (Primary), Middle and Senior. So, check out the News tab for this. We bring kids’ favourite Curious Times Weekly newspaper every weekend with top news, feature stories and kids’ contributions. Check out daily JokesPoke, Tongue Twisters, Word of the Day and Quote of the Day, kids need it all the time.
ME – My Expressions at Curious Times is your place to get your work published, building your quality digital footprint. And it is a good way to share your talent and skills with your friends, family, school, teachers and the world. Thus, as you will step into higher educational institutes your published content will showcase your strength.
Events, Quizzes and Competitions bring students from over 5,000 schools globally to participate in the 21st-Century themes. Here schools and students win certificates, prizes and recognition through these global events.
Sign-up for your school for FREE!
Communicate with us: WhatsApp, Instagram, Facebook, Youtube, Twitter, and LinkedIn.

2  (Please login to give a Curious Clap to your friend.) 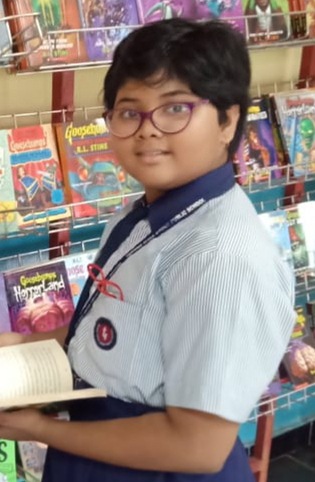